We decided party games aren’t just for Christmas, they’re perfect for that time before the Thanksgiving feast is ready or even the day after once your stomachs are all rested from eating so much food.

HOW TO PLAY THESE THANKSGIVING GAMES:

These games are Minute to Win It style games and depending on the number of people playing, there are different ways you can play them. Don’t know what minute to win it games are? Start with my minute to win it games page that’s full of instructions, scoring ideas, and more! You could also just pick and choose a few of the games to play however you want – no minutes necessary!


STYLE #1: MINUTE TO WIN IT FOR INDIVIDUALS – MAN VS. CLOCK


In this version, one player will be trying to beat the clock for each game. So for instance, they will have to try and complete the game within a minute (hence the minute to win it name). If they do, they win a prize. If not, let someone else have a shot. If you go with this style, I recommend choosing a different person for each game.


As an alternate version to this, you could also let the same person continue playing games until they can’t finish one in a minute. Or you could have everyone playing individually all at the same time (like version 3 below but in individuals rather than teams) and see who all can finish the challenge in a minute.


STYLE #2: MINUTE TO WIN IT FOR GROUPS


In this style, you’ll pick two players for each game who will going head to head against each other playing a game rather than trying to beat the clock. So, you’ll give each person the game supplies and see who can finish first. The first person to finish wins the prize. Again, rotate through pairs for each game, repeating players as necessary but this works well when you have smaller groups so everyone can participate in a variety of games.


STYLE #3: MINUTE TO WIN IT FOR TEAMS


In this style, you’ll split your group into two (or 3 or 10 depending on the number of guests) teams. For each game, teams must choose one player to compete head to head in the game with the other teams. So, for instance, one person from each team will be given the supplies and game instructions. When you say go, everyone competes to be the first to complete the game. First team to finish gets 5 points, second team gets 3, third team gets 1, and everyone else gets none. This works best if you have quite a few people and is a good way to get everyone involved cheering for their team.


·    large feathers that have the long pointy tips


·    paper footballs or these mini footballs

NOW LET’S GET TO THE GAMES!


Fill one of those big long under the bed storage containers with water. Give everyone a small cork with a fake flower stuck into it and have them put in on one end of the storage container.


To win, player must be the first one to get their cork from one end of the storage container to the other, by only blowing on it. They can either blow on it alone or through a plastic straw. First cork “boat” to touch the other end wins.


Before the party, pull out gummy letters that spell P-I-E for each letter. Put one letter of each of those words into an empty aluminum pie tin. (This pack of 50 pie tins would be perfect.)


Fill each of those pin tins with spray whipped cream and put in the refrigerator so they don’t melt while you’re waiting to play.


Oh and throughout everything, even unscrambling, they can only use their mouth. 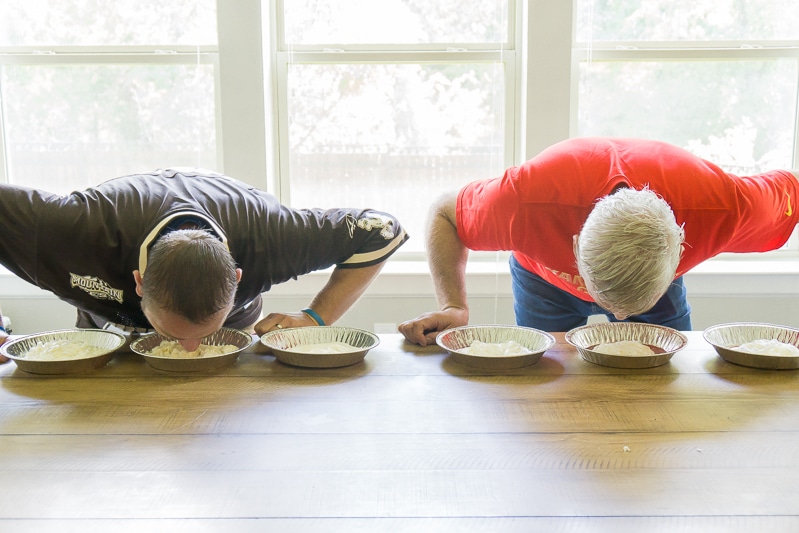 
To play, players must transfer three ping pong balls from the table to their goblet on the opposite side of the room. The catch? They can only touch (and hold) the ping pong ball between their chin and their neck.


Give each player a fake feather like these ones.


To play, players must blow the feather in the air and keep it floating in the air as long as possible. 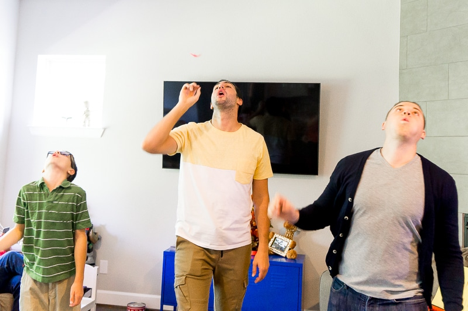 
Give each player paper footballs or these mini footballs and line up a bunch of buckets or baskets at varying length. Tape a number to each of the buckets – the furthest one should be 7 points, the middle should be 3 points, and the closest should be 1.


Players have one minute to flick (like you’re playing paper football) footballs into the buckets, scoring as many points as possible in the minute. Or have teams play simultaneously by using different colored footballs, and see who can get to 21 points first 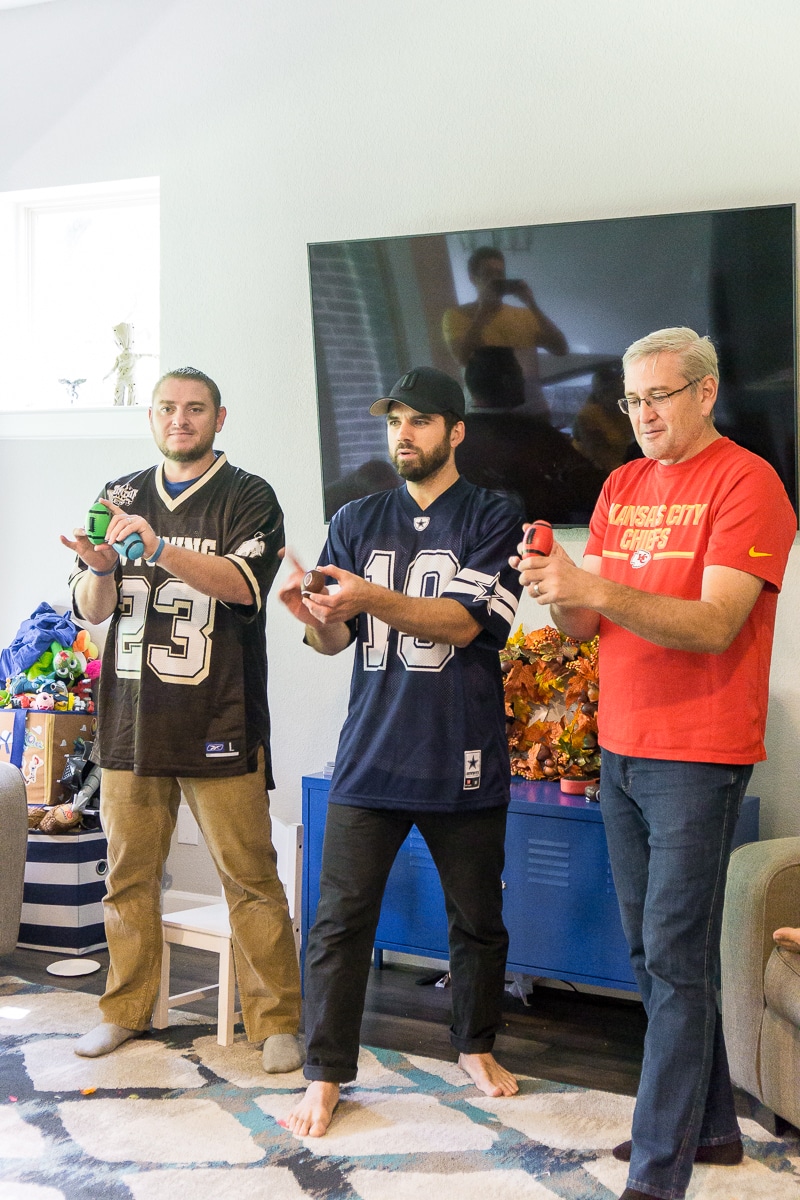 
Before the party, empty a tissue box for each player and replace the tissues with craft feathers. Tape a pair of pantyhose onto each box so the box is in the middle of the pantyhose.


To play, give each player a box tied with pantyhose and have them tie the pantyhose around their waist so the tissue box is on their backside. Players must move around and shake until all of the feathers fall out of their tissue box. 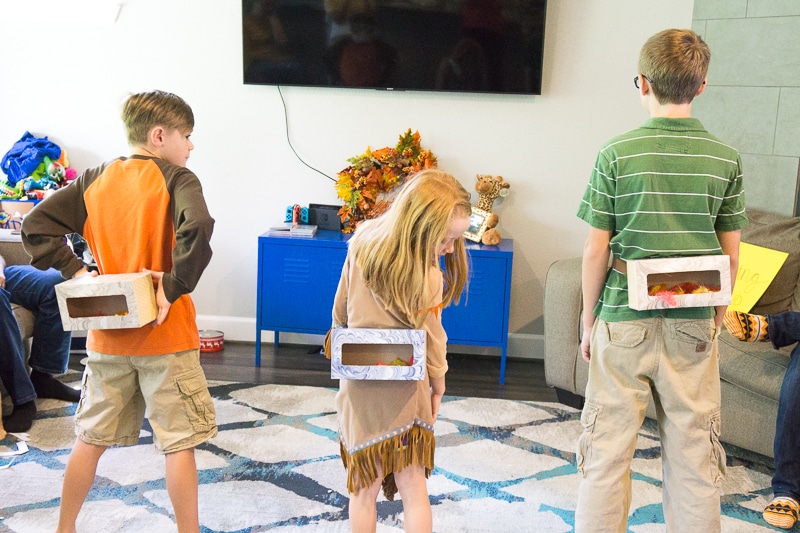 
This game requires two players per team. Give one player on each team a large empty fake cornucopia and blindfold them and have them stand on one side of the room.


Have the other player stand about ten feet away and give them a bucket full of plastic or stuffed corns (we used little Indian corns like these ones).


To play, the first player must hike (football style) the corn to their teammate who must catch three, blindfolded. Or if that’s too tough, catch one. Players can talk to each other to help direct their teammate.

Search Listings
(Prices and inventory current as of June 25, 2022)